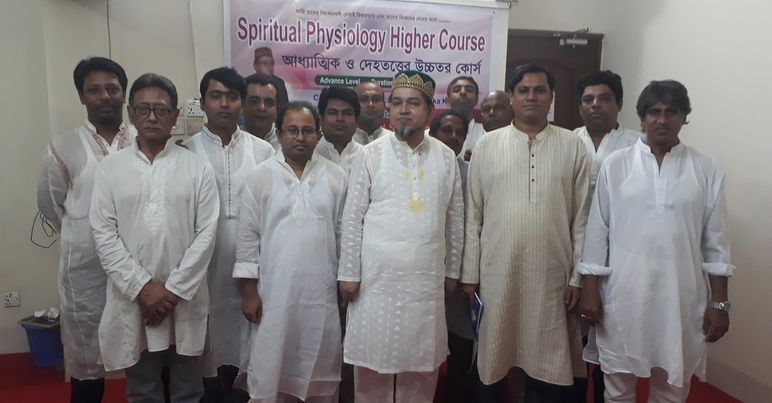 Spiritual Physiology Higher Course: What is necessary for human being to claim himself as the best of creation, is the attainment of god identity knowledge. Without knowledge about god’s identity, all worships are full of shirk.  That’s why the prophet Mohammad (PBUH) said, who doesn’t know about the reality of god is not true believer. Alhadi accumulated near more than 300 verses from Al-quran related to identity theory of exclusiveness and sifat of god, thus cleared it in an understandable way to the believers for teaching. Before, no experienced spiritual person cleared it. Without knowledge of porom and sifat, no worship can be accepted to god. The matter is fully proven based on research and document, no imagination or idea is involved here. Through spiritual physiology higher course, at first you will know the porom theory, the ahad god (ganje makhafi nirgun existance), sifat theory wahid god (tinitto or reflection of ahad), alame arwah or huge soul-world, alame amsal or world of picture or plan or lawhe mahfuz, alame ajsam or body-world or inanimate living universe. This course teaches the process of how to be attuned to god by giving theoretical and practical knowledge of the five subjects, by exposing divine name-theory and virtue-theory of allah.  In this course, the knowledge of logos theory, ahmad from ahad, asmane ahmad jismane mohammad, in reality light of mohamad, and all the creatures are rooted as the seed of mohammadi light or knowledge, gradation of mohammadi noor (light), wah-daniyat or identity of unity named as alame hahut, alame lahut, alame jabarut, alame malakut, all these identities are taught in this course.

There is indication of God in the universe and own self. Alhadi, in the Spiritual Physiology Higher Course program gathered ninety verses from holy Al-quraan, in which symbols such as Kaba, Kebla, Arsh, Kalima Taiba, Salat, Sun and Moon, Jibril, Shaitan, Sea and more such topics in the light of quraan, and literally teaches their true existence own bodies. By this way, acquiring elme ladunaa (spiritual knowledge) becomes possible.

Self-contemplation and creation of adam and his descendants in the light of Al-quraan, creation of sperm, nine respective nuzul of human creation or nine stages of downloading, creation of descendants of adam from sperm, mystery of pair-creation, dignity of mankind, bayat or promise, belayet and classes of belayet, and the practical teaching of sacrificing own-self through the empowerment from god by getting nearer to god is involved in this higher course.

Subjects about alame amr or minute world and qalb, ruh, seer, khafi, akhfa are accumulated and practical knowledge are given based on reality. God, in alquraan, even though declared 30 good hearts and 15 bad hearts, some writers confused people by writing books about only 7 types of hearts. Similarly, it’s the moto of the course to provide correct information about many subjects. Besides, Alhadi distributes knowledge about fueling heart and nafs based on research.

Alame khalk or ruh is that steam, which is made of five elements of human body. These are; Ether, Air, Fire, Water, earth. This terrestrial ruh is called Nafs. Water, fire, earth, air, ether from alame khalk are gathered from al-quraan, which human being can find the sign in own-self and can develop own spiritual power. After completion learning of ten latifa (station), salek enters to dairaye. So, introduction of eighteen daira are taught here. To tour in within our body world, 90 level teaching known as sabak, of sheikh sayed abdul kader gilani are taught. 60 teaching of kun fayakun, fel of 5 station, fel of 5 amr, fel of ojud, fel of ruh, fel of nafs, introduction of panchatane panjatan, 40 ganja deho, determining time of every hour of water, fire, earth, air and ether, teaching of 3, 3 eyes in human body, teaching of 4, 5 organs, 5 qebla, 5 ruh, 6 bad virtues, 7 arash, 7 sky, 7 land, 7 sea, 7 sifat, 8 kuthuri, 9 doors, batun, 10 house, 10 latifa, 11 stars, 12 buruj, 13 rivers, 14 kaman, 14 sejda, 15 makan, 16 guards, in this way 40 numbers are gradually taught about human physiology. Alhadi gathered the verses concerning water and described the mystery of water. For example, there are 12 springs in the world, but in the human body there are 14 springs. In these 12 springs there are 12 ports, which for 12 types of ethnicities.

In holy al-quraan, god said that, 56:58-78: Have you ever thought about your sperm? The idea is to try to achieve steadiness to succeed in the power of Kuwwat. Reality of kalema taiyeba, prayer, fasting, hajj, jakat, mosque, qaba, meraj and sejda are discussed also. Knowledge about mind, type of mind, description of conscious and unconscious mind, technique of making plan, telepathy power of mind, healing power, tetchiness power etc. can be gained. Feminine theory, masculine theory, quantity theory, pursue theory, wind theory, light theory etc. are discussed. Time knowledge, good-bad times, jockeys or wise times, the movements of the star, the cause of the tide, the position of new moon and full moon, six times in the same day etc. complete theories of all these are taught in this course. Moreover, the theory of wind, the good air and the evil wind, the pursuit of uruz beel boraki in the process of reaching kamaliyat (completeness) by lifting the nafs anil hawa into the akhfa are taught.

Spiritual Physiology Higher Course is accomplished with higher meditation. Utilizing the power of this meditation, you can restore health good health, flourish intelligence, solve problem, materializing your plans, changing the program of consciousness and creating positive program based on unconscious mind. You will progress to rapid success by gaining this knowledge and its practical use, which even you can’t think at this moment. In this course breathing techniques are trained by which both physical and spiritual development are achieved. Jikire pas-anfas, qalbe dom, seer dom, nafse dom, ruhe dom, khafi dom, akhfa dom or hifze dom are educated.

Different layers of meditation, such as; observing inner world of own-self, tafakkur or deep thought, gaining concentration, contemplating reflection of own face, touring the universe, teaching the levels of self-enlightenment are provided. The subjects and the fields you want to develop, is possible to do so by spiritual practice through this course. Watching the process of image of materializing own plan of mind, is the higher level of the meditation, which Alhadi teaches.

Tasauf Foundation is non-Political organization which came to limelight first ever in March, 20 through holding the Sufi Meditation course. The Foundation is registered under Society Act 1860

TASAUF FOUNDATION 2010. All rights are reserved.