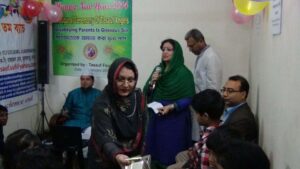 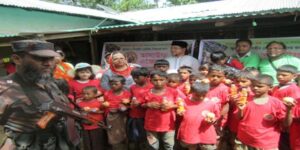 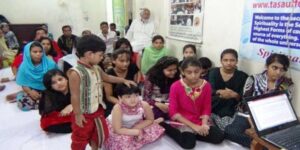 Tasauf Angel Club: Tasauf Foundation has established a new club named Tasauf Angels with an aim to organize young generations to acquire purity by practicing Tasauf (Sufism). “Tasauf Angels” is an organization of children up to 18 years that claims to practice the Truth by means of love and devotion to Allah. They will provide humanitarian services to improve human relations, encouraging high ethical standards in all vocations and building goodwill and peace in the society. The inaugural ceremony program of Tasauf Angels was held on 03 January, 2014 at Tasauf Foundation office in Mohammadpur.

The club conducted many activities since its inception for deprived children of this society. Tasauf Angel organized a program entitled “Exchange of views between Tasauf Angels and Street children”  on 21 March, Friday, 2014 from 10:30am to 12:30pm near Tongi Station with a view to make a bridge between privileged and unprivilegedchildren.  An organization “Change the Lives” has been working on street children who are living in the rail station at night and most of them are engaged with different informal activities such as litter collection from streets and garbage bins, carrying luggage in the station and so on. The ages of the street children were between 8 and 12 but are inadequately protected. Forty street children and ten Tasauf Angels participated in this program. The Tasauf Angels were the students of different reputed English and Bangla medium schools of Dhaka city like Mastermind, Shaheed Bir UttamLt.Anwar Girls College, Baridhara Sholars’ Institution (BSI).

Firstly, the children took part in physical exercise and after that the children were divided into 4 groups and each group consisted of 12 to 13 children (2-3 from Tasauf Angels and 10-11 from street children). Tasauf Angels exchanged their views and ideas with street children and the street children showed their potentiality and interest through their art works and writing skills. They came up in front and spoke out about their daily harsh life style which melted our heart. They also shared their dreams with us; some want to become police, some want to study in school and so on.Lastly, Tasauf Angels shared some snacks with the children. The street children were given T-shirt and some education materials by Tasauf Foundation. We owe a special gratitude to ‘Change the Lives’ for giving us the opportunity to arrange such program.

Tasauf Angel Club organized an Iftar program for about 200 children of SOS on 17 July, 2014 Thursday at SOS Children’s Village Dhaka office. SOS Children’s Villages provides abandoned, orphaned and vulnerable children with a caring, loving and secure family environment. Twenty two Tasauf Angels and nine Tasauf members attended the program. Tasauf Angels took part in the iftar program in order to share their food and exchange views with SOS children.  The Tasauf Angels were the students of different reputed English and Bangla medium schools of Dhaka city like Mastermind, Sunny Dale, Shaheed Bir UttamLt.Anwar Girls College, Baridhara Sholars’ Institution (BSI). They spent about two hours with the children and visited different houses of SOS village. The angels were very much enlightened by mixing with the children who are orphan though living together as a family. The angels observed that how different orphaned children stay together as a loving family, how the orphaned or abandoned children are being looked after by an SOS mother who lovingly cares for a small group of children. The angels were very happy to observe that the orphaned children are being facilitated with quality education, health care and basic needs.

Tasauf Angels took part in relief distribution program among Rohingya children in September 2017.  The angels extended their hand to help out the hopeless Rohingya children and distributed apple, juice and T-shirts among the distressed children.

In addition to all these, the angels sit together once a month and receive Islamic education and counseling by Alhadi and practice purification.

We are beside you (Pashei Achi): Tasauf Foundation in the service of humanity

Tasauf Foundation is non-Political organization which came to limelight first ever in March, 20 through holding the Sufi Meditation course. The Foundation is registered under Society Act 1860

TASAUF FOUNDATION 2010. All rights are reserved.